Looking to add a cuddly cat or kitten to the family?  Peggy Adams Animal Rescue League is offering a great promotion now through December 31st.  Adopt a cat or kitten and receive another cat or kitten for free! Just think of it as an AOGO (adopt one, get one) deal!

There is an urgency to place kittens and cats in forever homes, as Peggy Adams Animal Rescue League has over 650 cats and kittens currently in its care including kittens saved as newborns thanks to the League’s Neonatal Kitten Nursery.

Peggy Adams opened its Neonatal Kitten Nursery in 2016 in a revolutionary approach to saving lives of more newborn kittens requiring 24-hour care to survive. In 2017, they expanded the Kitten Nursery to accommodate even more kittens in Palm Beach County needing life-saving care. Currently, the Kitten Nursery is thriving and as we have entered another busy kitten season – the need for foster volunteers is urgent, as well as finding these animals their forever homes.

A recent kitten nursery graduate, named Panda, was brought to Peggy Adams as a stray kitten – just hours old.  He was hand-raised in the kitten nursery, receiving around-the-clock care.  Because of the community’s support, Panda was recently adopted into a loving home.  Peggy Adam’s goal with this AOGO adoption promotion is for more cats and kittens like Panda to find their forever families.

*The Peggy Adams Animal Rescue League’s adopt one kitten or cat, get one promotion includes: Adoption fee for the first cat or kitten: kittens under five months of age are $75 and cats over five months of age is “name your own price”.  For Palm Beach County residents, a $20 rabies tag fee does apply to each cat.

This AOGO promotion is valid at the Peggy Adams Animal Rescue League shelter location at 3200 N. Military Trail in West Palm Beach and ends December 31, 2019. The Adoption Center is open daily from 11am-6pm. Peggy Adams will be closed on Thanksgiving, Christmas and New Year's Day. The League will be closing at 4pm on Christmas Eve and New Year's Eve. This promotion is also valid at the League's off-site adoption locations as well.

The Mission of the Peggy Adams Animal Rescue League is to provide shelter to lost, homeless and unwanted animals, to provide spay and neuter and other medical services for companion animals, and to care for, protect, and find quality homes for homeless and neglected companion animals, to advocate animal welfare, community involvement and education to further the bond between people and animals. Peggy Adams Animal Rescue League has a 4-star rating from Charity Navigator, America’s largest independent charity navigator, and is the first animal shelter in South Florida to become AAHA (American Animal Hospital Association) accredited. The League is an independent nonprofit animal rescue organization operating continuously since 1925. For more information, please visit PeggyAdams.org. 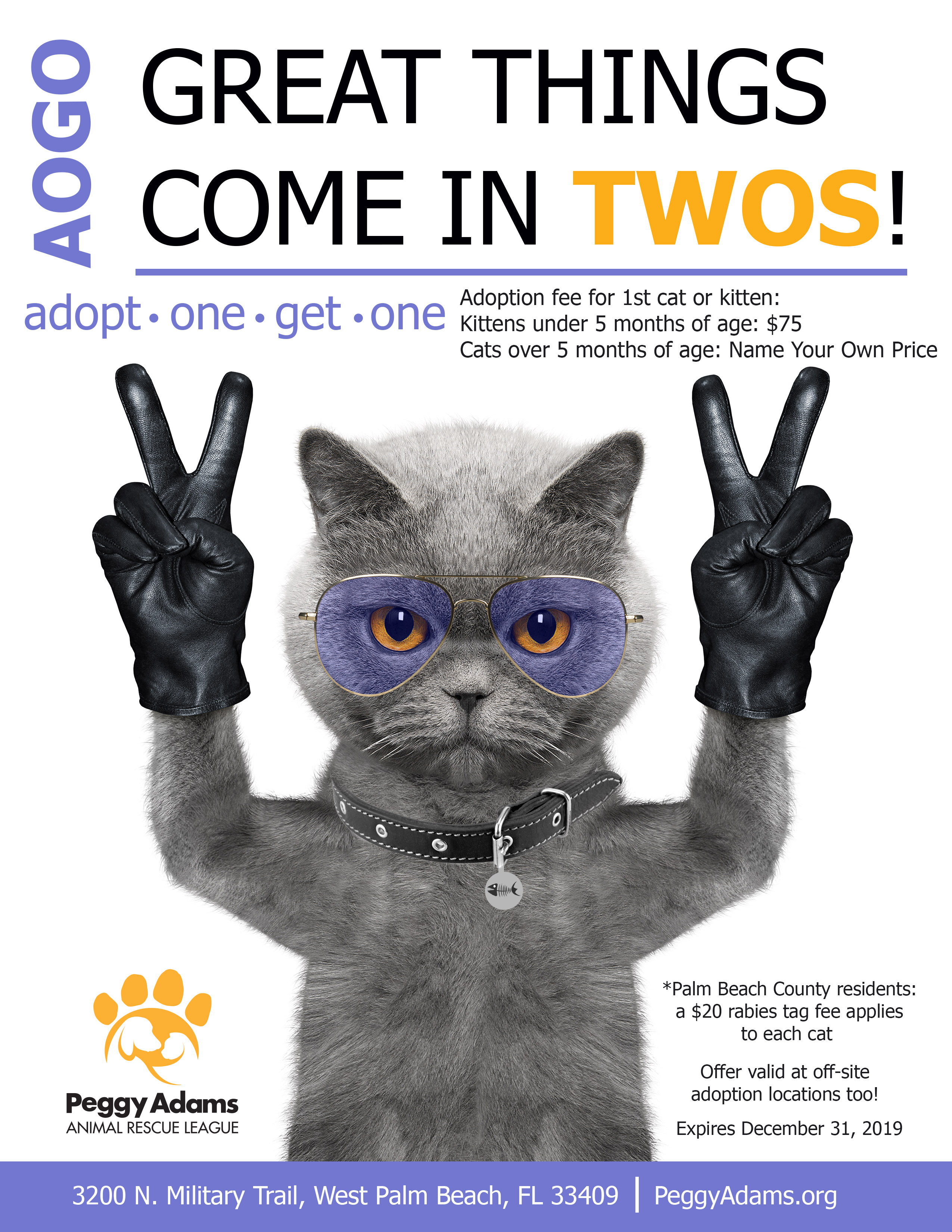