CBS12 News - Fireworks are not a blast for animals 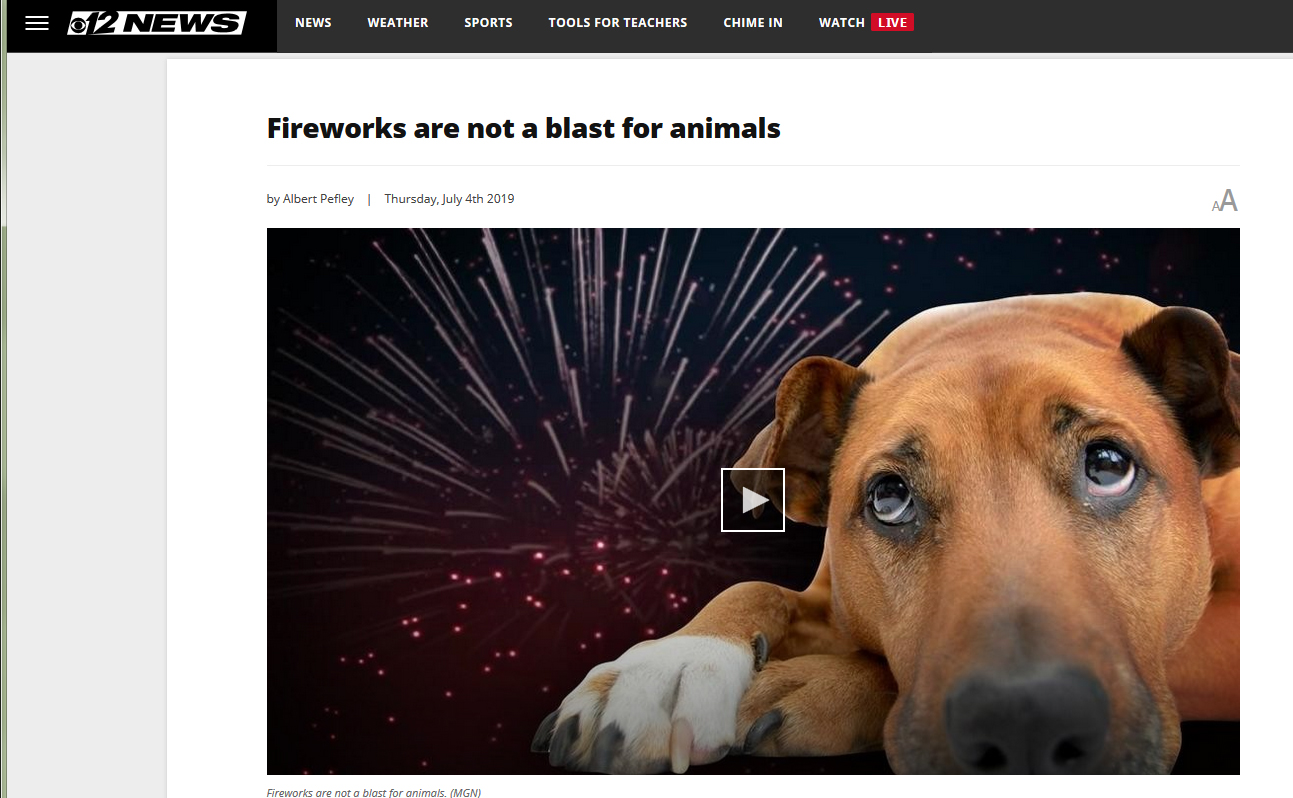 WEST PALM BEACH, FL/CBS12 — Maybe you’re already hearing the sound of fireworks on the Fourth. And the loudest ones are still to come, at the big fireworks shows Thursday night.

Fireworks of all kinds will light up the night sky, and a lot of people will set off their own backyard Fourth of July fireworks.

While that may be your idea of having a blast, however, it’s not a blast for pets that have to put up with that frightening racket.

“If a loud noise is not something normal to them, it can be alarming," said Jaclyn Berger, the human resources manager of Peggy Adams Animal Rescue League.

Berger says they have about 500 dogs and cats to look after.

They keep them shielded from the loud fireworks noise because the buildings they’re in are thick-walled, to help keep the noise out.

“I find it kind of terrifying. It’s loud and it's abrupt and it’s not something they’re used to hearing.," Berger said.

You might think loud noises like fireworks could be especially troublesome for kittens, and they have lots of them at Peggy Adams Animal Rescue League. But even the bigger cats, the older animals sometimes don’t take fireworks very well.

"It can be very stressful," Berger said.

Berger worries about the pets that people have at home, that are cowering in fear from the fireworks.

“Keep your pets inside, make sure that they’re indoors, comfortable and in a safe place," she said.

Berger says if you’re heading out to watch fireworks, don’t put your dogs or cats through that.

“Instead of taking your dog to the party, it would be a good idea to leave them indoors for this night," she said.

Some pets, she says, will do better during fireworks if they’re in the house, and in a small pet carrier, where they feel extra safe.

Even after the fireworks are over, the next day there could still be problems because some animals get so spooked out, so skittish that they run off and the challenge is to find them and get them back to their rightful owner.

Berger says to make sure your pet is microchipped and the collar and tag have the pet’s name on it so if the pet runs off and gets lost they can hopefully identify it.

We also checked with the Palm Beach Zoo, to see what precautions they take on the Fourth to protect the animals from the loud noises and pandemonium they may experience due to fireworks.

A zoo spokeswoman says they have 24-hour night security and an on-call animal staff manager should they have anything out of the ordinary. They will have security officers outside on the zoo perimeter Thursday night to make sure no one is setting off fireworks.

Category
In the News